Games to play on Zoom with your kids/youth group 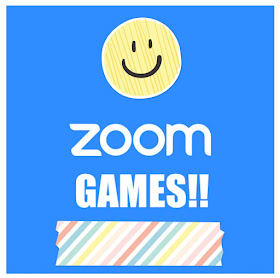 Everyone is having to adjust to their new "temporary" normal.  One way we're adapting in the church is to have virtual meetings with our kids/youth.  I've seen a lot of threads looking for Zoom games (because I have as well!) so I decided to compile all the ideas I found and put together a list.  Here are around 20 ideas...if you have more, add them in the comments below!  If you are using some other form of media - like facebook live, instagram, etc - some of these may or may not work.  Maybe you can tweak them though.
A lot of these games have a clear winner.  My sister's youth director delivered a quarantine package to the winner.  If you're up for it, that's a cute idea :)  What would be in a quarantine package?  Why, TP of course ;) And maybe some chocolate, puzzle book or other book, and anything else you may have on hand!

1.  Famous for two minutes - our youth director found this game :)  Let each youth (or those that want to participate) be Famous for two minutes!  Go all out and have them pretend to be on the red carpet if you want ;) All of the youth send questions just to that person that they want them to answer (many youtubers are doing this with their followers).  Encourage totally random, funny questions!  For younger kids, you'll probably need to give ideas and suggestions to get them started.  A few questions our YD and kids asked..."What movie have you starred in (or what movie would you have liked to have starred in)", "Do you like camping?", "Do you like raisins", "Who are you wearing?", "hot dog - sandwich...yes or no?!", "Favorite game", etc.

2.  Emoji hunt - My sister's YD did this with their youth group.  Fun idea!  The leader typed in 5 random emojis and the first person to type in the same emojis in the same order wins!  For younger kids (like elem or young elem), you could just do words, phrases or number/letter combos.

3.  Virtual Name ball - probably better with 12 or more participants -
You've probably played this game in person - you sit in a circle, call someone's name and throw them the ball.  Then, you have them speed it up, change the order, reverse, etc.  I'm thinking we could adjust this for Zoom...once a person's name has been called, they mute themselves.  So the person has to scroll through and look for someone that isn't muted (?).  I'm still contemplating this, but I'm sure there's a way to do it :)

4.  Scavenger hunt - This has been popular.  You can do it with any age group.   Set up some ground rules for safety though - no running through their houses :)  Send them on a hunt for random things that everyone would have in their house - milk, plate, toothbrush, blanket, etc.  As a parent, I think it'd be helpful (so that they don't have a pile of stuff to put up when they're done), to have them return the previous item before getting the new item.

5.  I spy with peoples' backgrounds - this is probably self explanatory.  Scroll through the people in the group and whoever is "it" says they Spy something that can be found in the room behind someone.  After a few rounds, have everyone do a 180 if they can (if they're on a desktop they can't) so the background is different.

6.  Headbandz - This was suggested by a few people but I'm not sure how it would work.  You wouldn't want the person to see what is on their forehead.   If you've figured out how to do this, comment below :)

7.  Bingo - email bingo cards beforehand (there are lots of free ones on the internet), or, make it simple and have them make their own 5 x 5 cards at home and then have them fill in the blanks with letters...or numbers 1-50...or give them a list of bible characters to choose from, etc

8.   Jackboxgames.com for 10 or less people.  I know nothing about this, but saw it suggested on numerous posts.  One comment to note - there is one game for a group of up to 100, but the YD said it was boring.

9.  Charades - this one is pretty self explanatory I think.  We've all played this.  I suggest that the leader use the private chat feature and type what the youth has to enact so that they aren't on their own coming up with stuff (that could be dangerous! lol).

10. Skribbl.io - https://skribbl.io/ - My son suggested this because he had seen youtubers play it together online.  It's like win, lose or draw or pictionary.  You can create a private room for you youth to join.  Play around with it first as I believe there are some nuances that make it a little different.

11.  A Quarantine Would You Rather game :)
Here is a Google Doc link that another youth director created with some questions as well as some objects for the scavenger hunt. (I think this was created by Matthew Benz-Whittington, if not, my apologies to whoever created it...I can't find it now!)

12.  Dissent is a board game recommended for older youth (maybe senior highs).  Someone suggested this as only the leader would need the game and then the youth could make their cards that go with it.

13.  2 truths and a lie - everyone is familiar with this one I believe :)  Each person thinks of 2 truths about themselves and a lie.  Everyone else has to figure out the lie.

14.  If you want to do more of an activity rather than a game, these sounded like fun from another YD on facebook.  My apologies again as now I can't find the post so I don't know her name!
"With our high schoolers, we had a couple people teach the whole group a Tiktok dance (they were really excited about it!), recorded everyone doing it at the same time, and are going to splice them all together (we have a pretty small group so that’s not too overwhelming.) With middle school, we each got a roll of toilet paper and tried to “pass” it from one person to the next in the grids on Zoom. Also recorded it and hope to share with the congregation. It was fun!"

15.  Conference call bingo.  Ok, so this one probably wouldn't work, but it made me laugh 😂  Maybe an idea when you meet with staff or your committee?? 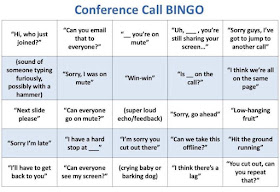 16.  Read my lips - sounds fun and very simple!  Someone says something on mute and others have to guess what they're saying.  Again, I would have the leader send the phrase over chat otherwise things could spiral out of control ;)

17.   Psychiatrist  - A popular game that many of us have probably played - I'm thinking there is a way you could play this on zoom as well.

18.  Follow the leader -  adjust for zoom!  Is there a way to block someone from hearing what's going on?  If not, you'll have to ask someone to leave their room or plug their ears...somehow you need to pick a leader without "it" knowing:

From the website
How to Play
Ask everyone to stand and arrange the group into a circle, facing inwards. Ask one person to leave the room for a minute. This person will be the guesser for the round. While he or she is gone, the group decides who should be the “leader.” The leader will be the one who sets the movements for that round. When this person is chosen, invite the guesser to come back. The guesser stands in the very center of the circle.
When the round begins, everyone starts swinging their arms up and down. The leader will eventually begin to do other movements, and everyone else mimics the leader’s actions, without being too obvious to reveal who the leader is.
19.  Rock, paper, scissors tourney - pick a partner - you could do this with actual physical movements or with emojis!  Whoever wins against their partner moves on to the next round and whoever they beat turns into their cheerleader.  Keep going until you have a winner - go all out and make brackets!

20.  Sherlock - seems easily adjusted for zoom!  Just have someone cover their eyes or put their heads down, then send one person something via chat they should change about their appearance or their background.  See if Sherlock can figure it out!
Participants needed: 5 or more.
Assemble students in a line and have one person be Sherlock. Sherlock leaves the room and the students remaining change one thing about their appearance. They can pull their hair up or down, put on a jacket or take one off, put a sticker on, and so forth. Sherlock reenters the room and tries to identify as many changes in the appearance as they can.

There you go!  20 ideas for Zoom games!  Here's another game that I LOVE to play and I'm trying to figure out if there's a way to do it over zoom...
Wink
What do you think?  Ideas?

Good luck everyone.  These are weird and surreal times - keep your spirits up and the joy and peace of Christ in your heart 💓💓