Large Group Hula Hoop games for ages prek and up!

Ok.  So the hubby is planning a retreat for our church and he put the two of us down to lead an hour of recreation.  To help him out I said I'd take this on (I love doing this kind of thing anyway, but lets just say I did it out of love ;).  Since we are scheduled right after worship and right before lunch I figure we need some active games - everyone is going to need to move around after sitting for an hour and work up an appetite for lunch! :)  So I got on pinterest and starting searching.  I wanted something different...and something we could do with 50 people of all ages.  We have children from age 6 up to older adults - so we have a wide range to plan for!  After searching for about 10 minutes I saw a hula hoop game I liked.  Then I happened across another one.  Then I got to thinking - could I plan an hour's worth of activities just using hula hoops?  Challenge accepted!  I searched for a little while longer, put on my creative hat and the ideas started flowing.  Fun!!  So, here it is - our Hula Hoop Hour of Fun.  I'll post pics when we actually do them.  For now, this is like my lesson plan :) 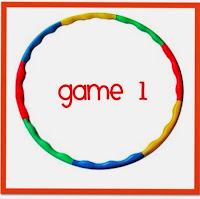 setting: gym/large enough space to accommodate your group
materials: 1 HH for every pair (in our case 25)
# of people: we have 50 but can be played with 10 or more
Time: depending on how many people you have 10-15 minutes

Icebreakers
1.  Like I said we will have around 50 people and you need about one HH for every pair.  In this game, start with 25 HH laid out all around the gym.  Start the music or have someone play guitar while everyone walks around.  When the music stops, they have to find a HH and join whoever else is at that HH.  There can be any number 2 or higher.  Then they have to tell the other people their favorite something (team, color, book, movie, ice cream flavor, subject, weather, sport, animal, etc.).  Pick someone to take away 5 HHs and then do it again.  Keep going (taking away 5 HHs) until there are only 5 HHs left (and close to 10 people at each one). 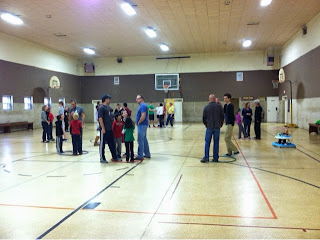 2.  Have someone add in enough HHs so there are three people at each one.  In our case we need 17.  turn on the music once more and tell them when the music stops to get in groups of 3.  Have them share with everyone their full name.  Do this a few more times then have them sit down in the HHs with their feet outside the hoop (and their rear inside).  (This game can be found in this video).   Tell one person in the group to raise their hand.  Tell another person to raise a foot.  The one with their hand raise is number 1, the one with their foot raised is number 2 and the one sitting normal is number 3.  They have to remember their numbers!  (make sure the trios are sitting pretty far away from each other so they don't run into one another)  The leader is going to call out 1, 2 or 3 and that person has to get up and run around their HH and sit back down first.  Start in order then mix it up getting faster.  Then, stop the game and tell them they now have to learn their left from their right.  The leader will now call a number with a direction - ex. "number 3, left!" and number three has to stand up and run around the HH going left or counter-clockwise :)  The younger kids may need help with this.  After 3-4 rounds stop the game.  Their next direction is to join 2 other groups of 3. 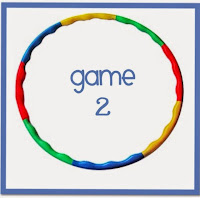 setting: gym/large enough space to accommodate your group
materials: 1 HH for every 9 people (or however big you want your circle)
# of people: 5-10 (much more than that and it would take too long)
Time: 10 minutes

PASS THE HOOP
So you ended the last game in groups of 9 at one hoop.  Have them join hands around their hoop in the form of a circle.  Have one person pick up the hula hoop and put their hand through it...then join hands again with the circle - so the HH is now stuck hanging from a pair of hands :)  This game is everywhere on pinterest, but I found it here.  When the leader says GO!, they will start passing the HH around the circle without letting go of their hands.  First one around wins!  Do it a few times - going different directions.  Stay in your group of 9 for the next game. 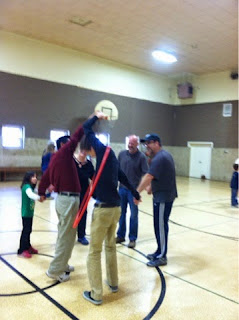 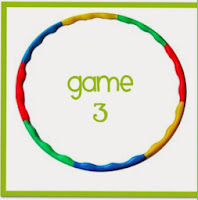 setting: gym/large enough space to accommodate your group
materials: 3-5 HH for every 9 people
# of people: 5-10 if you want to do groups or this could be a large group activity
Time: 10-15 minutes 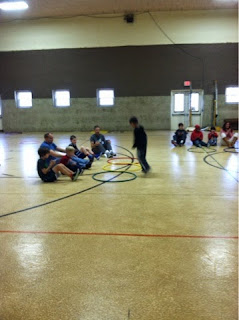 I thought about doing this as a whole group activity, but I thought it would be fun if everyone got a chance to be the conductor!  So, I'm going with small groups.  I'll let you know how it goes :)  In our case, everyone will still be in a group of 9 with one HH.  They will need 3-5 HH total - depending on how brave you are to try this ;)  I got this idea here.  I'm going to do this slightly different so that everyone will get a chance (if they want to) to be the conductor.  I think I will have the group sit in a line instead of a circle.  Have them pick someone to start as the conductor...explain to them everyone will get a chance that wants one and that it will get increasingly harder...this may change the order of volunteers :)  The conductor stands in front and starts with one HH on the ground.  When the conductor stands in the HH, everyone in the group sings the ABCs.  When the C jumps out, they stop, when he jumps in they start over.  Simple, right?  Practice it a few times and then switch conductors and add a HH.  Now, when the C jumps in the first HH they sing, but in the second they clap.  Let them practice this a few times (if the C jumps out of both HHs they are silent).  Now change conductors and add a 3rd HH!  The third one will be stomping.  Let them practice this a few times.  If the group wants to be challenged even further let them add a 4th (snapping) and then 5th (humming jingle bells).  If the group doesn't want to keep adding, let them switch conductors until everyone has had a chance to try.  Once you decide the game is over, tell them to leave the HHs on the ground and walk around the gym with the music. When they hear the music stop, tell them to find a HH and make a group of 5.  While they are walking around, pick up enough HHs so that you leave enough to make the groups of 5 (in our case, with 50 people, we need 10 HH).  I had one from each group take a video on their phone and send me their best "conductor" (if they wanted to) and I told them the best one would go online :) Here are two! :)  You can see they got adventurous and started jumping into two hoops at the same time :) lol  Some of the conductors overestimated the skills of their orchestra ;) 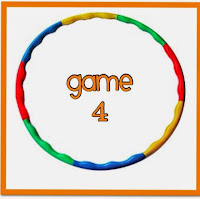 setting: gym/large enough space to accommodate your group
materials: 1 HH for every 10 people
# of people: no less than 6 to as many as you want
Time: 10-15 minutes

BUILDERS AND BULLDOZERS
This game sounds awesome.  I found it here.  But I love the spin that the video I posted above put on it.  Now my large group of 50 has been divided into 10 groups of five.  Once they are in their groups, have them spread out all over the gym (the farther away they are the more they will run :)  Have one person in each group come up to you and get 3 items from your box.  You can use bean bags, blocks, the little plastic thingamajigs from the link...basically anything that you have at least 30 of and doesn't roll.  Have them put their items in their HH.  When the leader says "GO!", they are to run around and grab other groups' items and bring them back to their own.  Rules: you can only pick up 1 item at a time.  2.  NO guarding your HH.  The leader will call time and whichever team has the most items in their HH wins.  Play a few times for about 1-2 minutes, then have two groups join (we'll then have 5 groups of 10) and play a few more times.  Hopefully everyone will be on a winning team at least once :)  The pic is a little blurry cause everyone was running so fast! :) 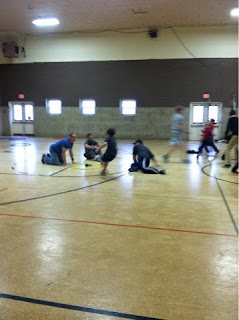 After these four games you probably won't have much time left.  Even if they all only take 10 minutes (which they won't) and you count all the "in between" times of changing games and explaining instructions you are still up to around 50 minutes.  HOWEVER, I always like to over plan so here is one more game "just in case"... 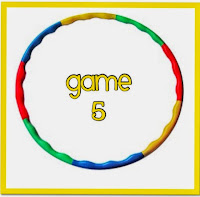 setting: gym/large enough space to accommodate your group
materials: 1 HH for every 2 people
# of people: 4 to as many as you want
Time: 10 minutes

PARTNER GAMES
If you are following my plan, then everyone is divided up into groups of 10.  To get them into pairs, tell everyone to think of their favorite Disney Movie.  When the leader says Go!, they are to yell out their movie and find someone else who is yelling the same thing.  Once they have a partner, tell them to line up on the sideline.  Give them one minute and then stop them.  Tell them to pick a color and do it again.  Anyone left standing tell them to pair up and line up.  Give each pair a hula hoop.  Tell one person to throw/roll the hula hoop as far as they can and the other person tries to catch it before it stops rolling.  I got this idea from the video I mentioned above :)  Let them do this for a few minutes and then have them time each other and see which of the partners can HH the longest.  Once they have their winner - tell the 25 people left to stand out in the middle and you can do a final HHing contest to see who is the best hooper :)
We ended up doing the contest and it was hilarious!  Well, maybe hilarious isn't the right word...it was unbelievable! :) We had 3 girls who went 15 minutes and wouldn't stop!  They could've gone forever!  I had to make it harder for them - walk 5 steps forward, 5 steps backwards, turn in a circle...but they still didn't stop!  So I declared a 3 way tie :)  You can see that 2 of the girls didn't even stop for the group photo we took after we had all finished playing :)  They did stop for lunch though!


I hope you have a great time Hula Hooping!!  If you are looking for other group games, I write religious escape rooms!  check them out at my teachers pay teachers store :)