He's Got the Whole World in His Hands tee! 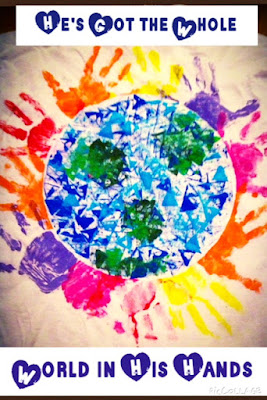 Our VBS theme this year was He's Got the Whole World in His Hands and I decided to make some world t-shirts with their hands around them. It wasn't an easy process and it took me a few trial and errors to figure out what I wanted, but with organization and plenty of helpers for our littles - they turned out awesome! 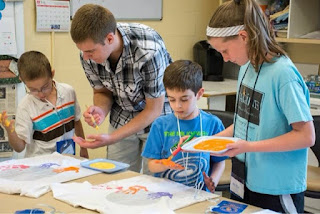 Follow these five easy steps and you've got yourself an awesome t-shirt :) AND all your friends' handprints as a memory :)

1. Prep beforehand - cut out contact paper circles and put them on the backs of the shirts - put them close to the top but leave room for their hands. Second, cut out something (cardboard, newspaper, etc) to put inside the shirt so the paint doesn't go through. We also wrote their names on the tags beforehand but that's not a must-do :) 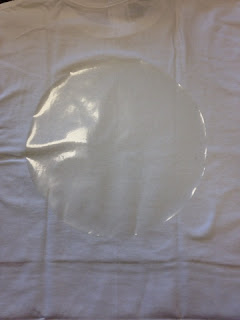 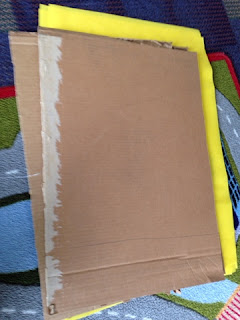 2.  The day of - I put out the paint and paint brushes beforehand and decided to number the tray and the paint. It helped if the child or helper needed more of that paint (cause some were similar in color) but it wasn't a big deal if it got mixed. I just wanted to be over-prepared. 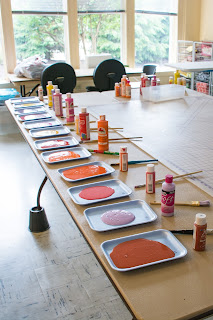 3.  As the children came in we had each of them stand at a shirt at the table. Then we let them pick out their paint. For the littles, the helpers got the paint.  Make sure a variety of colors are chosen - yellows and oranges are bright and fun :) At first we had them stand at their shirt and then we realized - duh! They all look the same...doesn't matter where they stand. ☺️ We did have the shirts grouped by classes though beforehand which made it easier.  IMPORTANT: AFTER DOING A TRIAL RUN, I REALIZED THAT IF THE WORLD IN THE MIDDLE IS TO POP OUT, YOU CAN'T HAVE BLUES OR GREENS AROUND THE OUTSIDE! So, stick to pink, red, orange, yellow and purple hands:) 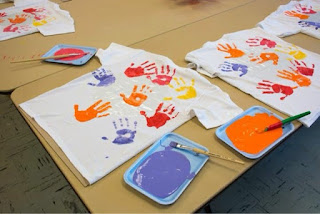 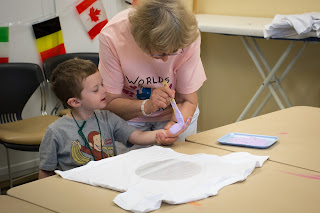 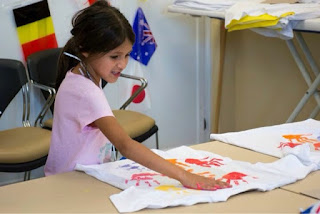 4.  Now you're ready!  If the child is able on their own, have them paint their hand and put it on the shirt themselves. We found that the 2nd grade and up were pretty good at this. One important instruction though - MAKE SURE PART OF THE HAND TOUCHES THE CONTACT PAPER. Otherwise it won't work. Then, the kids pick up their tray, move around to the next shirt, and put their hand on the next shirt. We had around 7-8 in each group and we had them go around twice. Once wasn't quite enough. 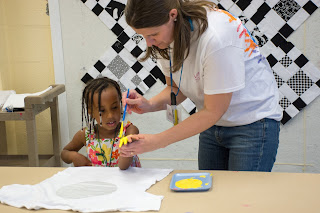 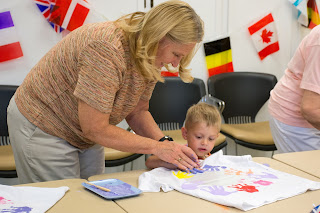 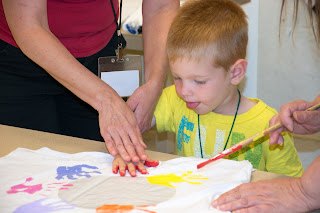 5.  Yea! Now let them dry. You need A LOT space for this if you have a big group -just an FYI :)  Once they are dry, peel the contact paper off. They look so cool! :)  we used stamps and did "mosaic art" for the world. You could do it many ways - but this fit our theme.  I had them cover the circle with one shape dipped in any blue they wanted (I encouraged more than one blue), then had them put 3-4 stamps of another shape with green paint.  viola!  awesome shirts!! 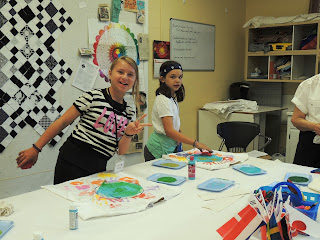 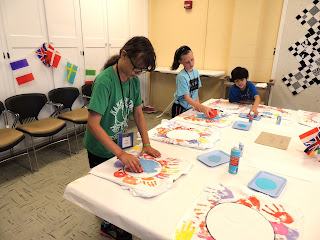 One of our groups was really large and some of the hands weren't place correctly.  If the hands aren't all the way around the circle then you can't tell it's a circle :)  So, to remedy this problem, you can see in the above picture I went around the circle (before it was pulled off) with grey paint.  They turned out great! 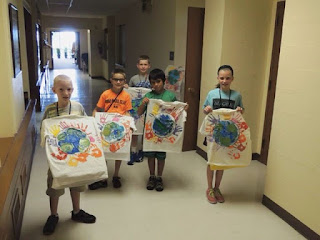 I've also done one ((an idea I saw on pinterest) with duct tape and made a cross :) easier :) 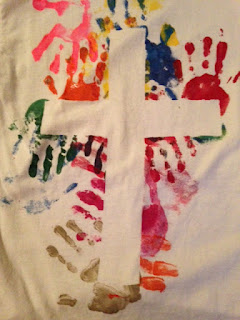