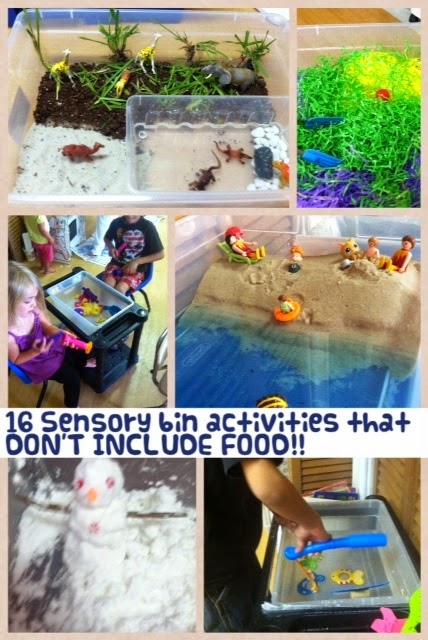 A friend of mine went on a mission trip where she did a VBS with the local children.  One of the activities she did was making maracas out of plates and dried beans.  The activity went well and the children had fun making them; but after the activity she saw the mothers come in and start picking up the dried beans off the floor and tables...not to help clean up, but to put them in their pockets so they could cook them later.  She realized what she had done and felt bad - she could've used little rocks or any number of things that can be found laying around.

After hearing this story, after living in Peru for two years, after meeting many families here and in third world countries that are in great need, after having a child with a food allergy (click on link), after developing food intolerances myself (link) and after having a niece with PWS (want to know what PWS  is? click the link!)...I realized that food is a necessity - not a luxury.  It's not something to be wasted or used randomly...whether in the classroom or at home. We need to be sensitive to those students that are in our class that may not have enough to eat or have different eating habits/allergies...but instead we're sending them home with a dried noodle picture of a dog.  Not cool.

So, for the past two years as a prek teacher I promised myself that I would not use food for any craft OR in my sensory table (where tons of rice and noodles are wasted by schools).  It was difficult at times because most sites you go to that have ideas include food in the majority of their sensory bins.  However, I have here 16 sensory bins that go with different themes I have taught the past few years...and
none include food :)

I will say, I kind of cheated on one because I used baking soda...not sure if that counts - but I included it anyway :)  Hopefully you can find some substitutes for your next sensory bin...and donate that food you would've used to a local food bank :)

The 16 listed below are bins that were "special'...I also used sand once or twice just for fun, and water a few times with measuring utensils.  I also used playdoh quite a bit because the children LOVED playdoh :)  But here are some ideas that are NOT just your regular sensory bins...

1.  Sea Animals - I did two sensory bins with this unit.  I found some cute fishing poles and fish at the dollar store so we did that one week... 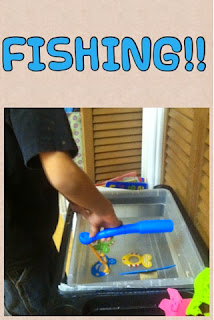 2.  And then we made "buoyant buddies" - an activity I found years ago at familyfun.com...which no longer exists.  I thought you might like the printable though so I scanned in my printouts and put them on my teacherspayteachers site (which you can join for free) and you can download the printables for free!  They're pretty cute - just need foam, scissors, permanent markers for the faces and embellishments, hot glue gun  and a cork for each child.  Each child made one at the beginning of the week and we used them in our water sensory bin the rest of the week. 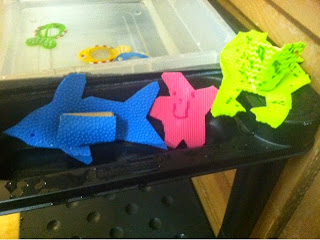 3.  We talked a lot about water this year - where we find it, what we use it for, etc.  So, for one week we had a "beach" in our sensory bin!  You can see on the left how I set it up - I have a pool set that had floats and pool chairs, and I have a Diego scuba diver - they came in handy for the beach :)  It was a little more work because I had to set it back up every day...as you can see on the right, after making waves and playing in the water, the sand and water eventually became "one" :)  But the kids loved it!! 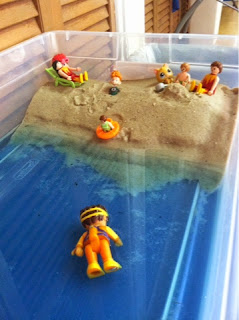 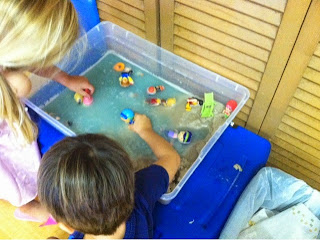 4.  Another animal themed bin I made was "painting with animals".  I did it with zoo animals but you could use any kind.  Just line the bin with paper, put a few blobs of paint on the paper, and have the children walk the animals around!  so simple and so fun!!  Honestly, the finished project looked so cool we hung it up for a long time :) 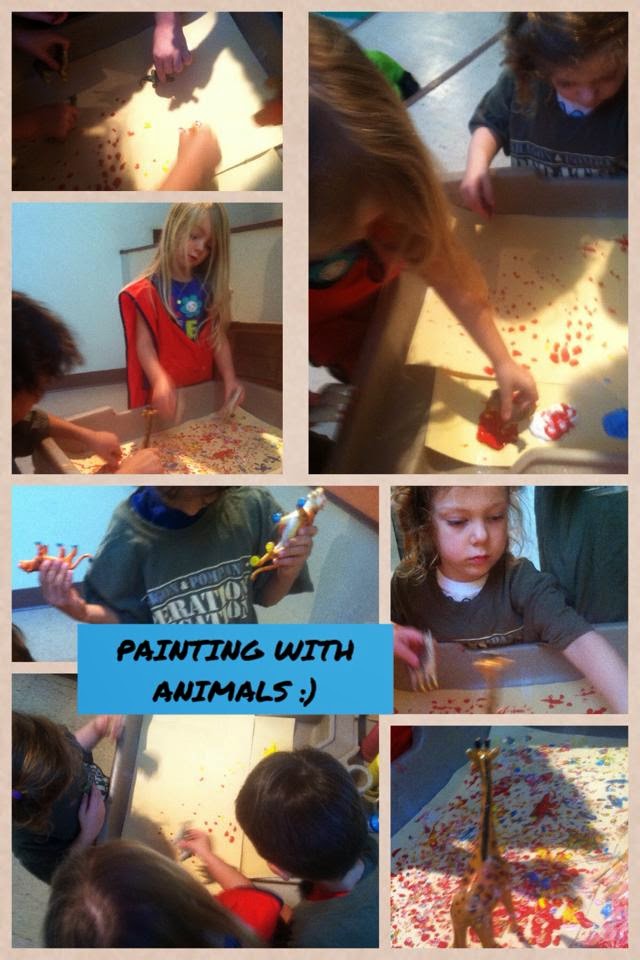 5.  We also learned about opposites - like hot/cold - and we learned about animals that live in cold habitats.  So, I made a "cold" bin.  They were all dying to play there...but most of them only played for about 5 minutes..."It's COLD Ms. Laurie!!".  lol  I used penguins, a HUGE block of ice, white rocks for little pieces of ice, polar bears, tongs, a shark and of course Diego and his boat to save the animals! 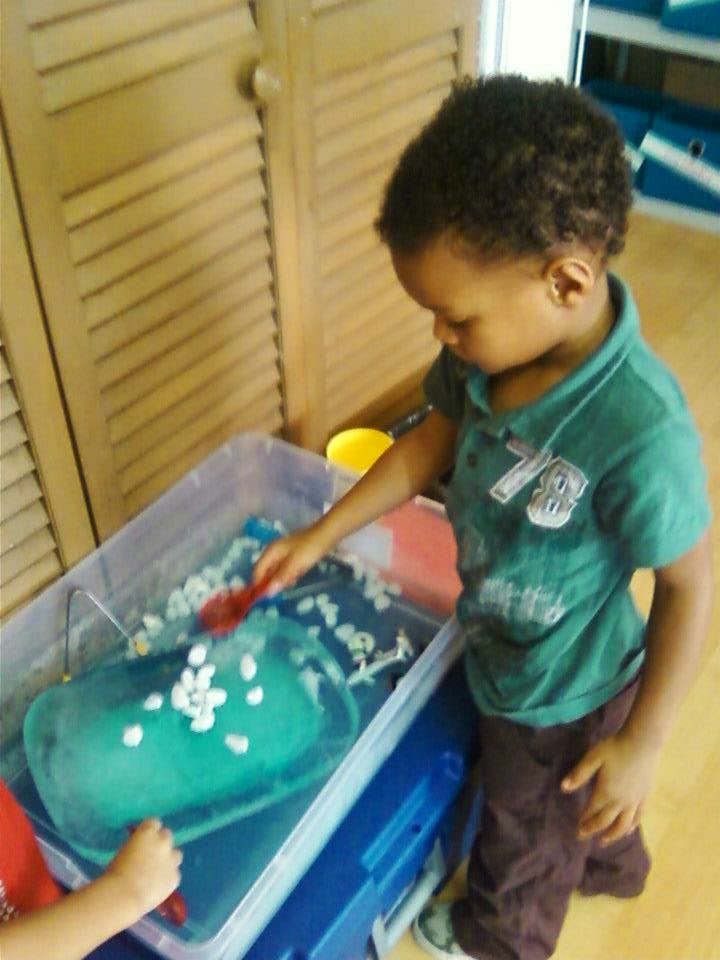 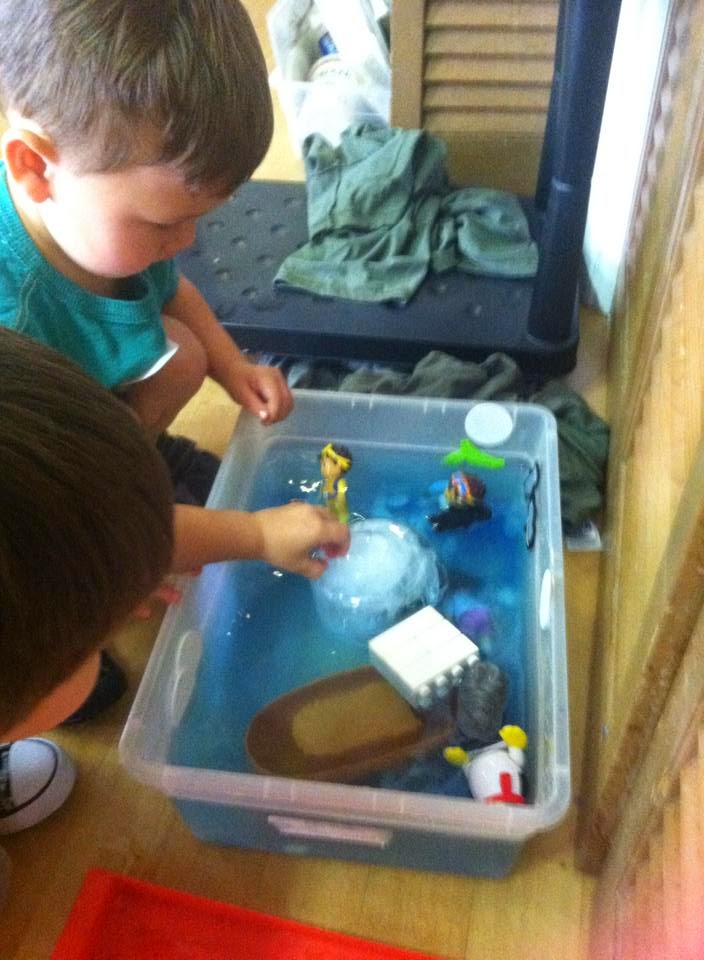 6.  One last animal bin I did was about Habitats.  I saw this idea on pinterest and tweeked it a bit to suit my class and what they were learning.  I had three habitats - desert (sand and camels), water (alligators, frogs and a hippo I had laying around :) and the forest/jungle (with elephants, giraffes and a lion I found). 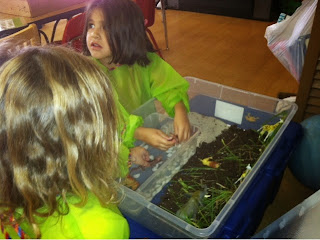 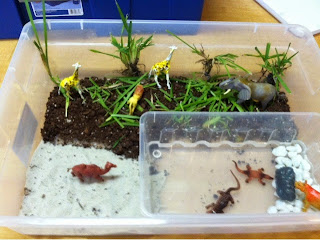 7.  Ok, I lied.  There were a few more animal bins I did :)  I did different ones each year so I have quite a variety!  We did a FARM bin using a small barn I had and that stuff from the dollar tree that looks like hay :)  You can see it in the picture. 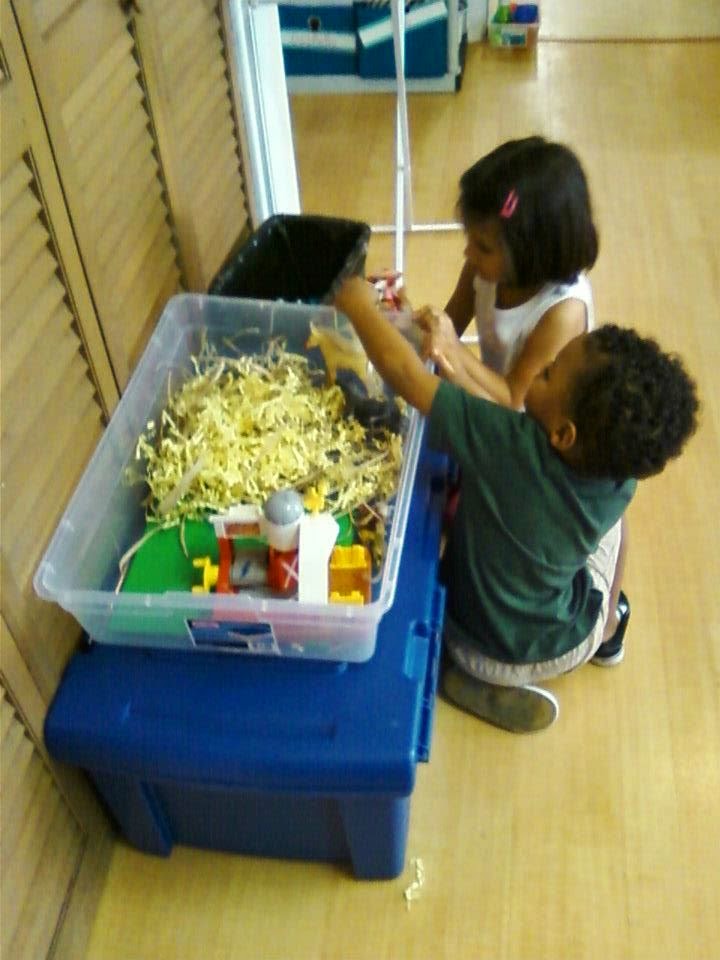 8.  Lastly, and, one of my favorites was a play-doh zoo!  I saw this idea on pinterest and went with it!  I made 2 batches of play-doh (it takes a lot!) and gave them TONS of popsicle sticks and they made some wonderful zoos!! (and what a great fine motor activity! shhhh.... :) 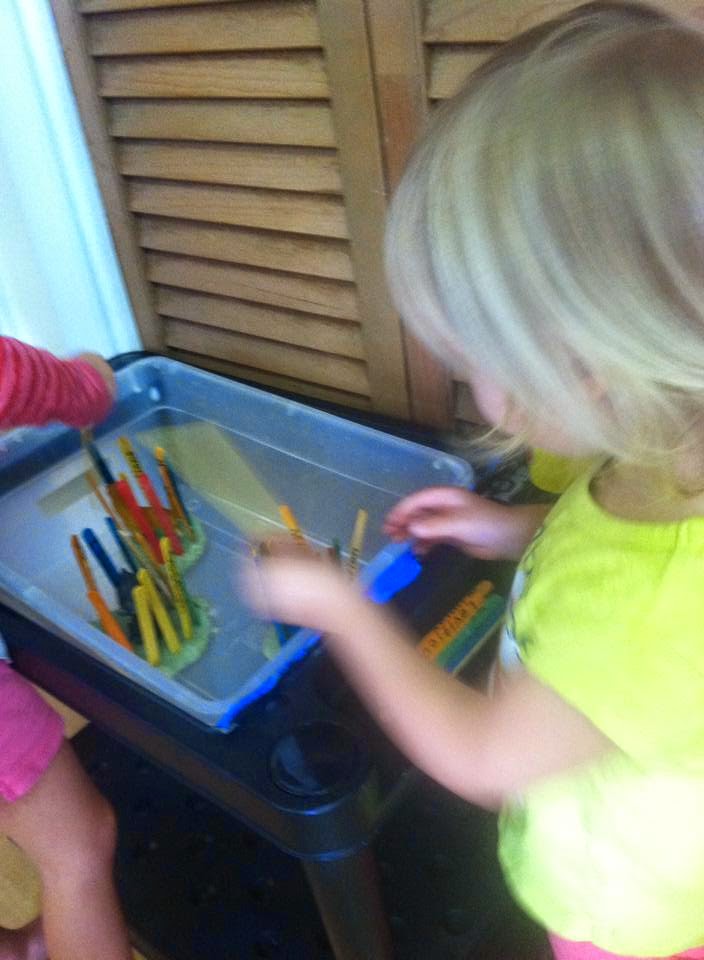 9.  For Easter, I made an "I spy" Easter bin.  I LOVE hiding stuff and making them look for it :)  And they like doing it!  You know all those little squinky balls you have laying around that you don't know what to do with?!  Well, use them for miniature Easter eggs and hide them :)  The kids picked them up with the tongs and then had to put them in a bucket - you could color coordinate if you have the materials.  I also hid a few other little "springy" type items in the Easter grass - like frogs, rabbits, etc. 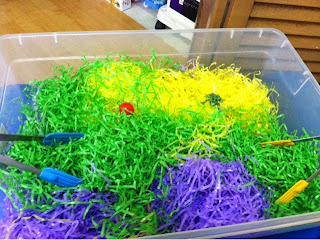 10.  SNOW!!  Such as easy activity and they absolutely loved it.  Mix baking soda and conditioner to your liking (I had to mess around with it to get the right consistency) then dump it in your bin!  I added spoons, buckets, and little beads to make the snowman's nose, eyes and buttons (I didn't have any kids that put stuff in their mouths...otherwise I wouldn't have put those out) 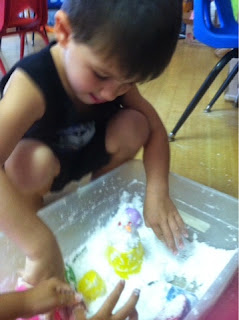 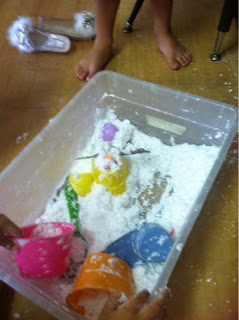 11.  Mixing Colors is one of my favorites and one that the children asked for repeatedly.  So fun, so easy and they learn a lot!  I have some great plastic "beakers" that have a little stand.  I've seen them in magazines and online, but I got these in a cooking chemistry set.  I used medicine dispensers (first I had to show them how to use them...but they caught on quick) and put one in each bowl of my 3 primary colors - red, yellow and blue. They mixed the colors in the tubes to see what colors they could make, then dumped them in the bucket I had beside it (the yoplait yogurt container :). 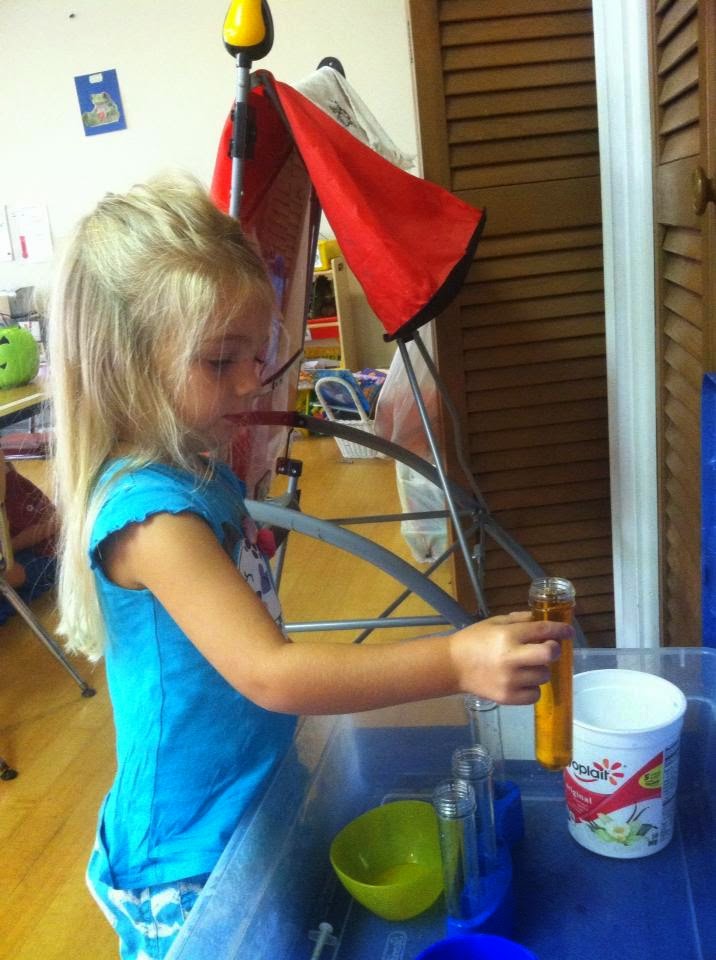 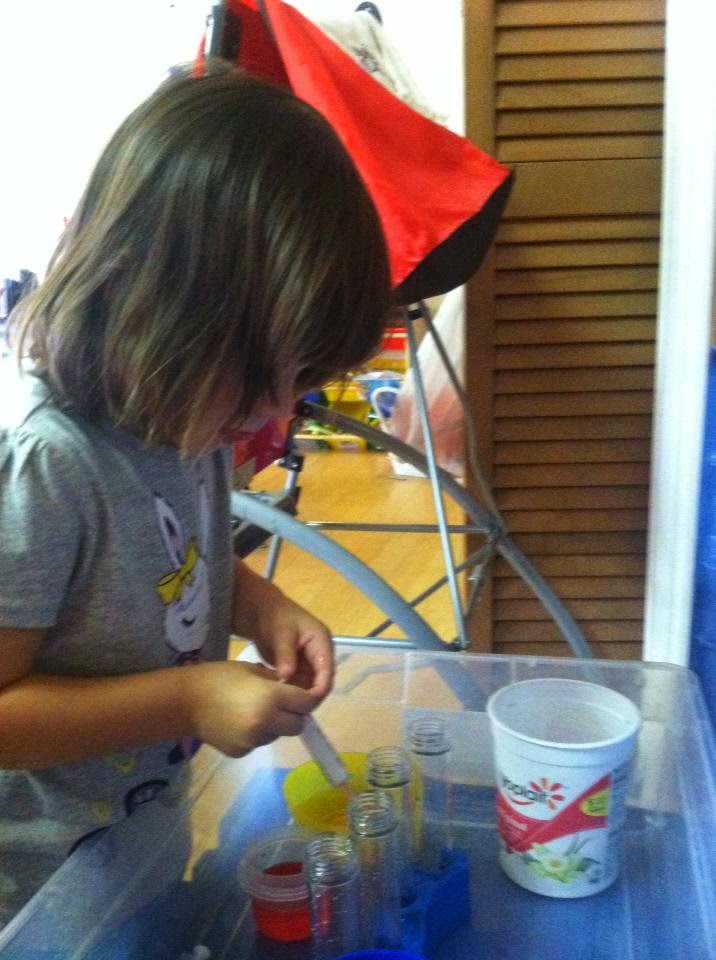 12.  SAND.  I did use sand a few times.  One was to create a desert habitat and I put some cacti and camels in it, another was to bury dinosaur "fossils" that I printed out from Curious George on pbskids.  It's a dino skeleton - they had to find the pieces and put it together!  I laminated the pieces and had velcro on the back so all they had to do was stick the pieces on the velcro... 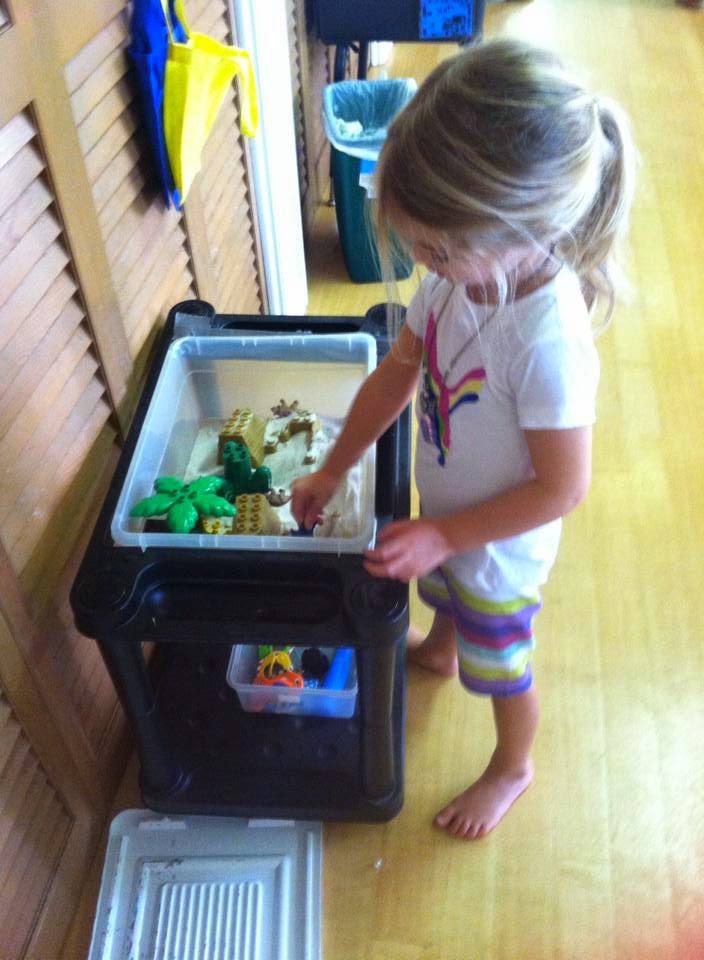 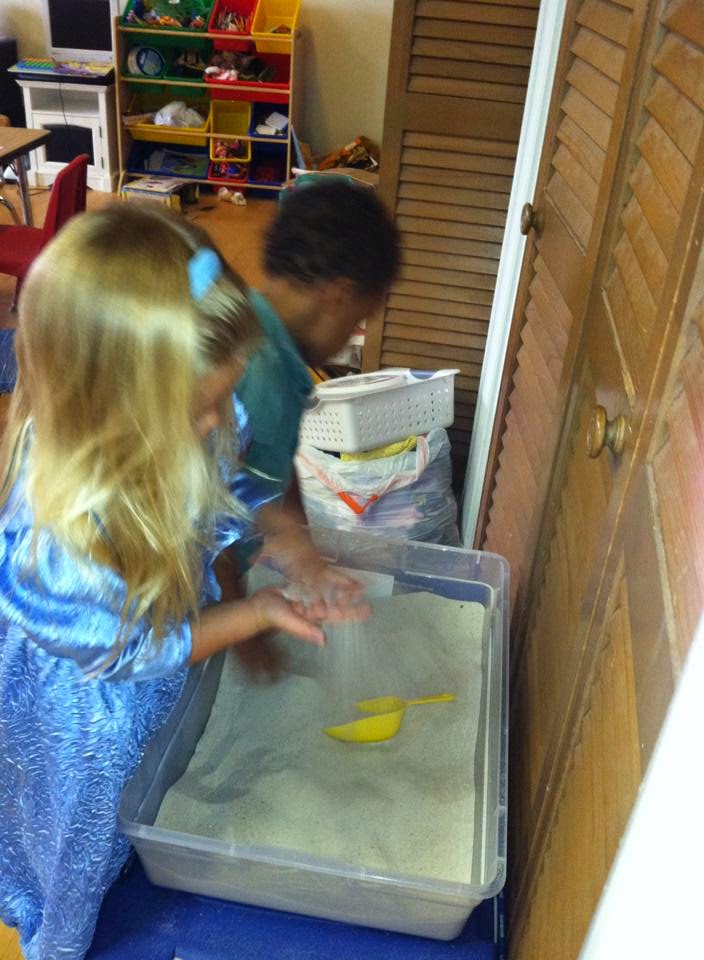 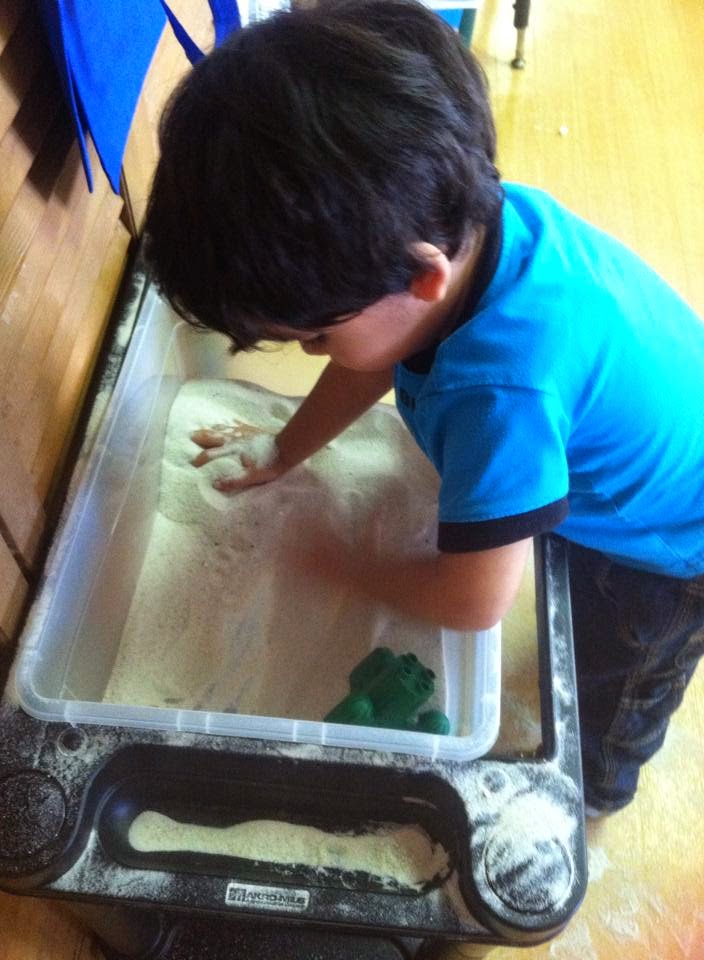 13.  DIRT - planting and harvesting.  So, I actually learned a little from doing this activity. We were studying plants and the "harvest" around Thanksgiving and I looked up online what plants (besides potatoes and carrots which I knew :) grew underground.  Once I found a variety (peanuts, radishes, potatoes and carrots) I "planted" them in the dirt (left picture).  The children harvested the food - I had the top of the bin on the floor and that's where they sorted their veggies - then they had to re-plant them for the next person.  I stuck part of the plant up out of the soil, but the children liked to hide them :) 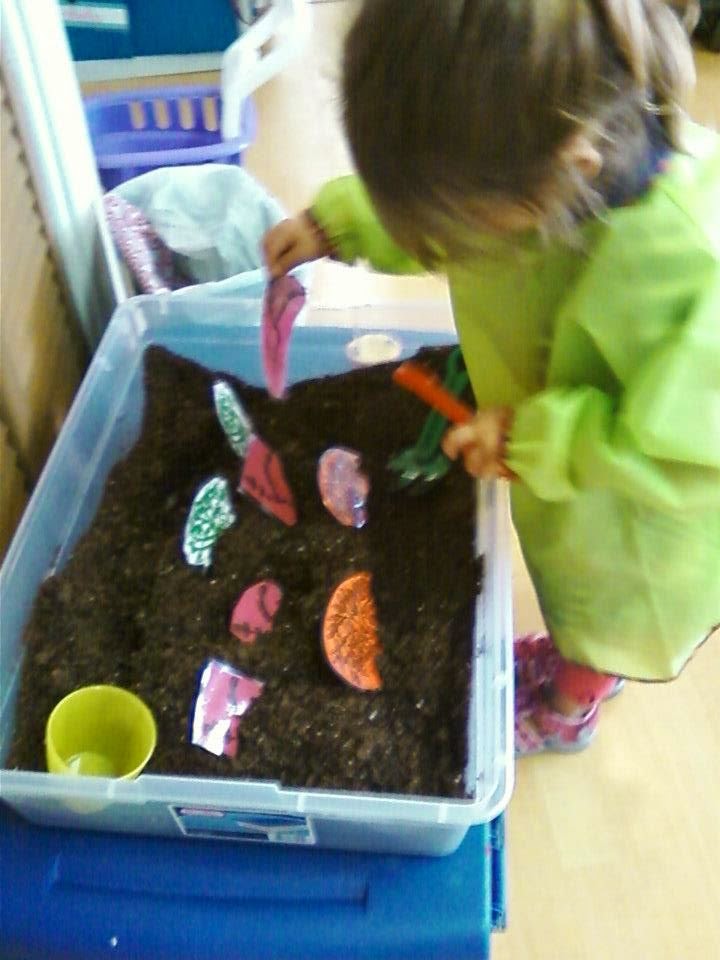 14.  Gak, Slime and Goo!!  We made a variety of creepy substances over the last couple of years - and after making it together (or separately at the table), we put it all in the sensory bin so we could all enjoy it :)  I let them stick toys in it too (check out the "gooey" princesses.  lol). 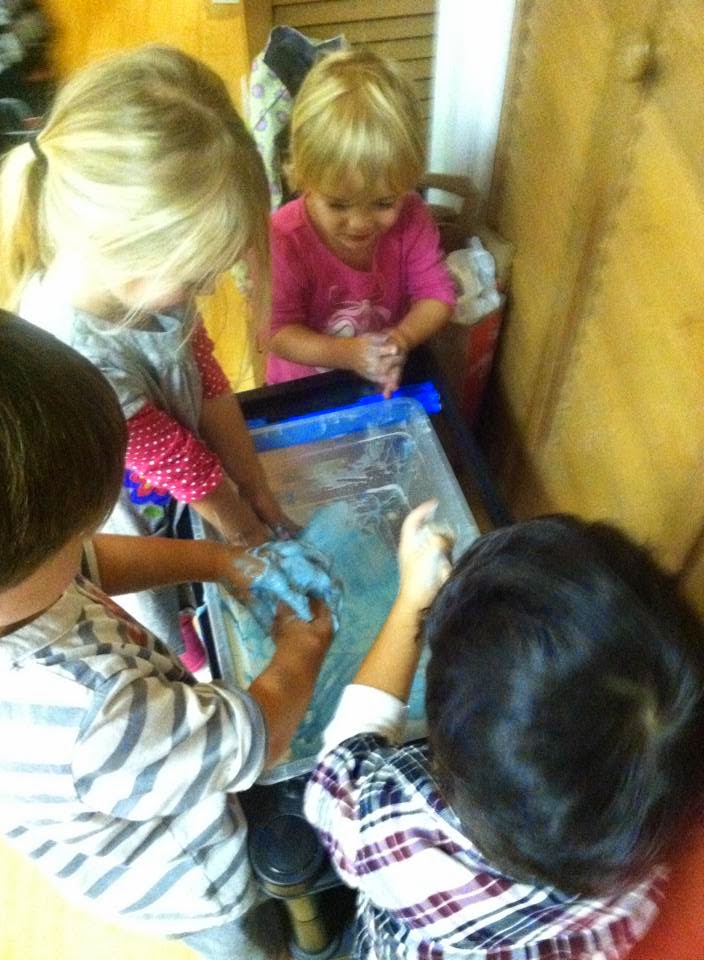 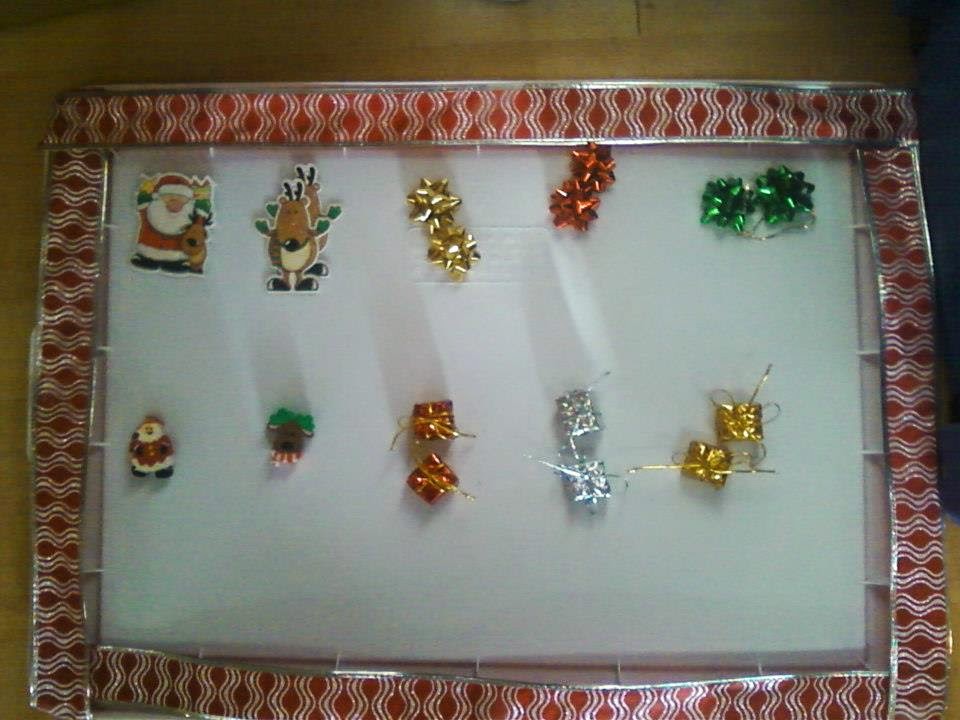 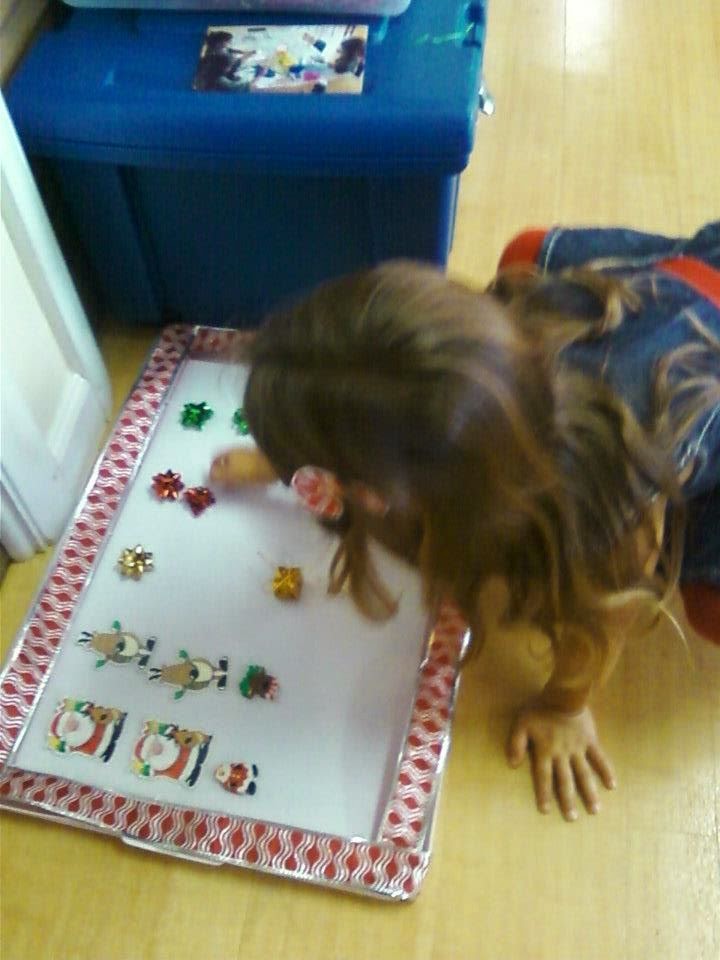 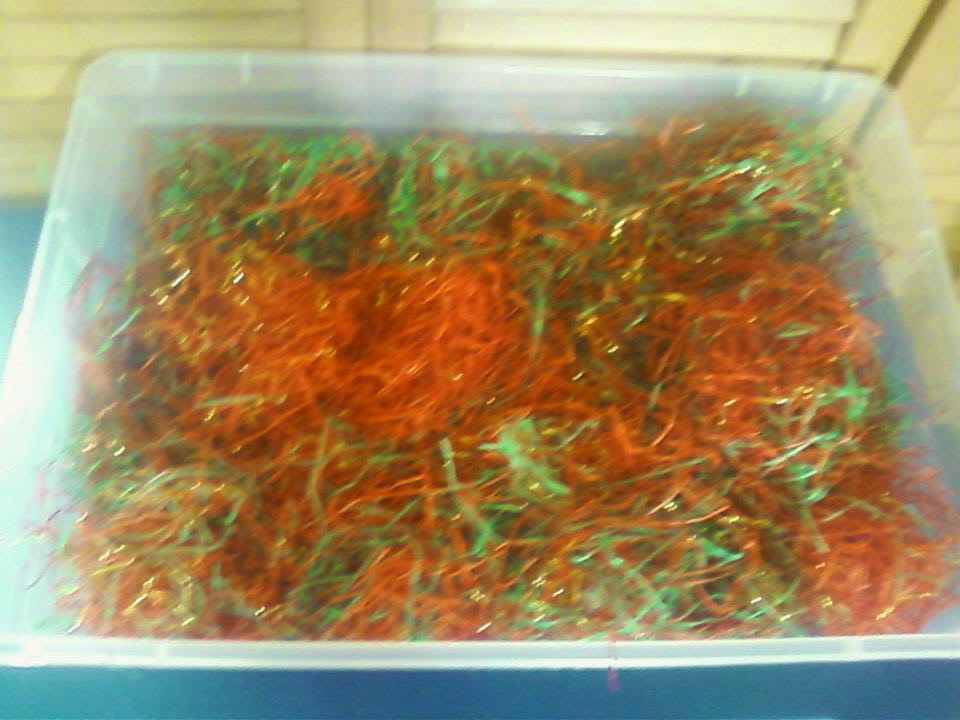 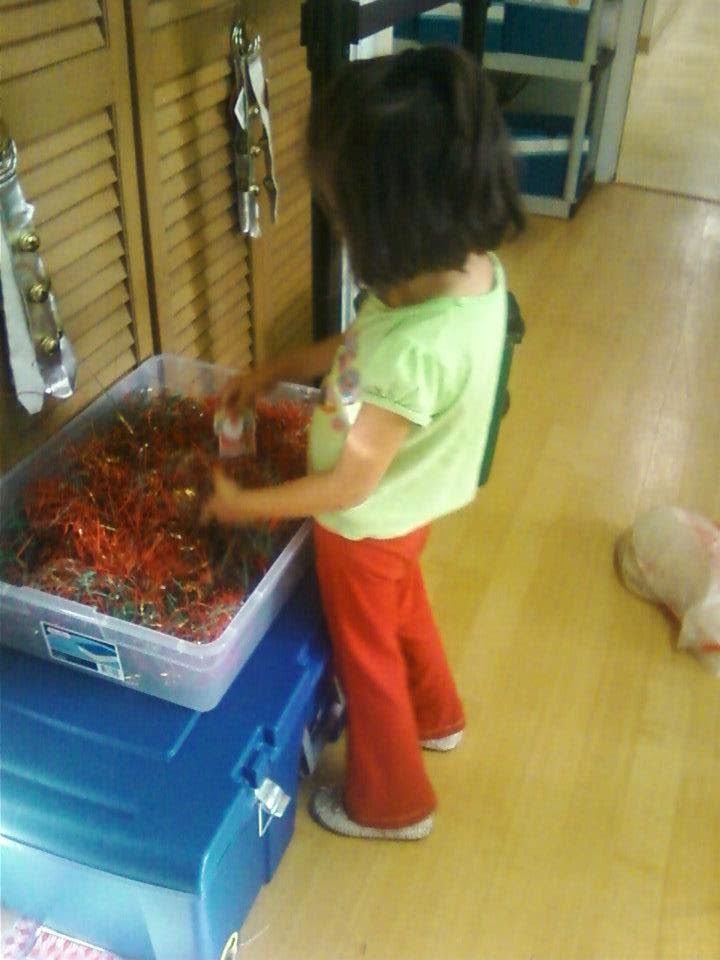 16.  A good fine motor activity I put in the bin was pre-drilled wood, screws and screwdrivers.  The children couldn't wait to take their turn with this :)  All they really did was screw the screws into the wood...but they loved working with the tools! 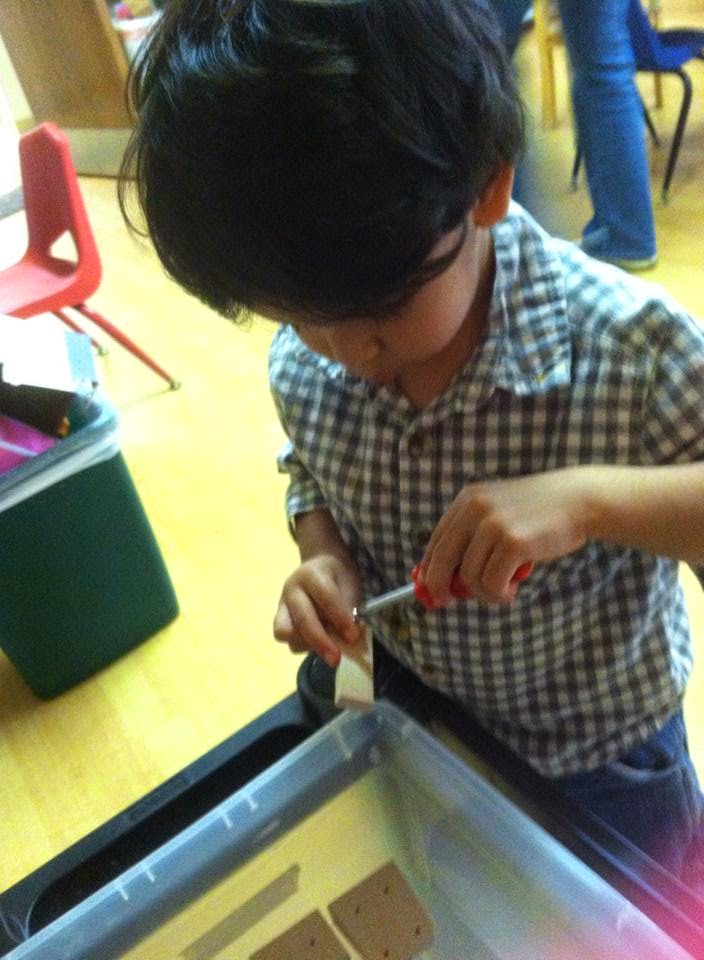 So there ya go - at least a year's worth of sensory table activities and no food was wasted!!  Have fun! :)
Posted by Laurie j at 3:56 PM