How I use Ipads in church! 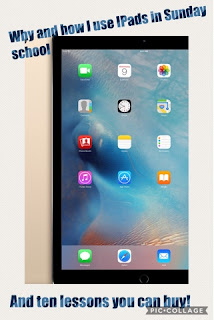 I have been using Ipads in our Sunday school for 2 years now - I am planning our third.  I find it a lot of fun (and a challenge!) to use technology in an interactive way that not only engages the children but also teaches them!  Here is the first blog I wrote about apps/ipads and some ideas of different apps that I use/suggest.

I am sharing with you all the Bible stories that I have done in the past few years and the lesson plans I wrote for each story.  The curricula we use for Rotation Sunday school doesn't include Ipad/app lesson plans so I do my own researching, playing around, trying out and lessons.  It takes a lot of time to be creative (and buying and playing around :) and then write the lesson plan so I am charging $3 for each lesson or 10 lessons for $20.  As you'll notice in the lessons, I like to use youtube videos to review or introduce the story.  Once a month, it's a fun change of pace - especially if I can find a lego video - the kids love those :)  Since youtube isn't child friendly, I suggest only putting it on one ipad (if you can) and "hiding it".  You can put it in a folder with other apps but put it a few pages/swipes over so that it can't be seen easily by the kids.

I have a few suggestions if you are just now setting up your Ipads.  Ideally you want to have an Ipad for every 2 kids - and yes, I suggest Ipads over other tablets for a couple reasons - which I'll tell you in a minute.  You don't have to have one for every two children though.  We don't.  Some classes have more kids and they have to share.  But, as you will see as you read some of my lesson plans, many of them work even better if you use the app as a group.  Those of you that have used computer labs in the past may be thinking - what?! :)  The great thing about apps is that they are SO much cheaper than computer programs and also that they offer a much larger range of activities.  Did you know there are apps that allow the children to draw "live" while recording their voice at the same time?  This makes for a great re-telling of a story that can be recorded and sent to the parents or showed on the screen for the congregation!  Or that there are apps that let you make a complete storybook that will play back to you?  Most of my lesson plans do not include "games" - although a few do.

Okay, now I will tell you why I prefer Apple. One, there are more choices as far as apps and two, you can connect it with the apple tv.  I suggest you get one.  All of the tablets can be connected together - so when you buy an app on one tablet, it shows up on all of them.  The reason I suggest the Apple TV is because you can hook it up to a projector and then each child can project their own screen up onto the large screen.  That way, even if you are doing something in small groups, you can have a "sharing" time at the end where they can show their picture/drawing/video, etc.  to the whole group.  The Apple TV's are around $80 but you may have someone in the congregation willing to donate an old one - you don't need the latest version because you're only using it to project.

Another suggestion is that you set up some kind of movable cart to transport the ipads around and that also contains one of those outlet strips to charge them.  You will have a lot of cords and plugs and they will "walk away" if you're not careful ;)  I velcro-ed mine to the cart (as well as the strip).  So now, I can plug them all in and charge them by just plugging in the strip.

All my lessons are on Teachers pay teachers.  This is a more detailed list, but I'm not giving away the farm :)  This took years of work and as much as I love my fellow educators, time is money :)  Most of these apps can be used with a variety of stories which is another reason I like ipads better than computers :)  so, the lessons are specific to the stories - but could be used for others (and I make some suggestions).

1.  Elisha/Elijah:  This lesson would best be used as a review to a story.  However, I've used the app as a discussion starter for a Bible study and I've used it for no educational purpose - just for fun :)  This is one of my favorite apps now and in the last year it has become an actual app you can download instead of getting it off your browser (which makes it even easier!).

2.  10 Lepers:  Do your kiddos like to act stuff out?  Are they "dramatic"? :) If so, this app would be great.  We used it for the Ten Lepers but any story with a simple plot, enough characters for your kids and minimal props would work.  I immediately thought of Daniel in the Lion's Den and Jesus Walks on Water.

3.  David and Goliath:  This is one of the few stories that get so much attention that it has apps just for it!  I tested out about 10 apps, some free, some I bought; and picked 4 that I used with my kids.  One we did all together and the other 3 I let them play around with.

4.  Abraham and Sarah:  The app I chose for this story is a very versatile app that I've used for different kinds of stories.  I liked it especially with Abraham though because this is a long story, with different parts and settings.  Other stories that would go well with this would be similar - like Jesus' birth story (the whole story), Easter, Joseph, Jonah, Shadrach/Meshach/Abednego, etc.  This app would work best if you have the apple tv because each small group will need to project their screen up for everyone else to see.  I like this app because it brings old school to new school :)

5.  Four Friends (man lowered through roof):  this app is funny but a little complex.  Let the kids have some time to mess around with it to get the feel for it.  It works in the same was as the one above, but settings are limited so stories that take place in one spot work well with it.  This app has more animation though than the one above.  Other stories that I can think of - Samuel's call (bedroom), Adam and Eve (garden), lost sheep (outside), etc.  most of these aren't religious apps (which isn't a big deal) so the kids had to substitute different characters and things to represent what they needed.  It turns out to be pretty funny...yet educational!

6.  Creation:  I LOVE this app :)  I could use it with every story!  I think it works best with stories that have numbered items like the 10 commandments, beatitudes, Psalm 23 or other long scripture.  Give each small group their section and let them figure out what they are going to draw and what they are going to say!  One of the reasons I love this app is because I can make a youtube video out of it and the parents can watch :)

7.  Samuel's Call/Jesus' baptism/Joshua and the battle of Jericho and other stories about "listening":  There are a lot of stories in the Bible that focus on listening - listening to God, listening/obeying your parents, listening to others, etc.  I use a variety of listening apps that I found and tried out that contain games and activities as well as a group activity to film and show to the parents or other classes.  In addition, there are some youtube videos utilized to teach about sound and videos to watch on the stories.  This lesson plan has 2 separate lessons - one for Samuel and one for Joshua.

8.  Joseph:  This app could be used for any story as a review.  It's a popular game and the app can be used for this game or other activities.

9.  Prodigal Son:  The apps I used for this lesson plan (this has a separate lesson for prek/k) can be used with other stories, but the lesson is written specifically for the Prodigal Son story.  They concentrate on the "lost and found" part of the story - how we may, at times in our lives, be or feel lost, but God is always with us.  We are never lost to God :)

10.  Feeding the 5000:  As the one above - this lesson is written specifically for this story, but the apps can be used for other stories.  I emphasized the number in this lesson - just how much is 5000?  It's hard for anyone to comprehend but even more so for kids.  This will give them a visual to just how many times did Jesus multiply the fish and bread!

If you have found any other apps that you think would work great in church please comment below!  I'm finding new ones every day :)
Posted by Laurie j at 11:03 PM