updose #5...over halfway there!


Well, everything that could've gone wrong this morning seemed to have gone wrong 😜.  We left late for the train station and halfway there realized we left her epi at home and had to race back to get it.  We arrived at the train station only 8 minutes before the train was to leave.  That's when I realized that I booked the wrong day for the train, so I had to book it again real quick with my app because there were too many people in line to do it in person.  Thank goodness there were still seats and it wasn't full!!  But now I have to call and see if they'll credit us with the train we paid for but didn't take!  ugh!

Once we got on the train (phew!), it got delayed because something broke down on the track.  The conductor apologized for the delay and said that we were lucky we didn't have to stop altogether...so I guess that's a plus!

When we arrived at the train station in Philly, we called an uber because it was very cold and we didn't want to walk.  The first one came and went saying we weren't at the right pick up spot (he was wrong).  The second one was very nice, but went the wrong way and a normally 7 to 8 minute ride took 15 minutes.  Overall, instead of getting there almost an hour early like we should have, we got there five minutes late!  Thank goodness for the train though because traffic was terrible.

Ella had no issues with her last two weeks of doses so she "graduated" from oat flour mixed with peanut flour to just straight peanut flour.  we have been looking forward to this! Why?  Check it out...


She had updosed to 2 teaspoons of oat/peanut flour...which is a LOT of flour to mix with something.  It thickens very quickly and it has a not so yummy taste.  Ella had a rough week making herself take it every night - gagging her way through her D'animal mix.  So, when she graduated to just 1/16th a teaspoon of peanut flour we were ecstatic!  It's nothing!  It'll be a piece of cake!

Well, we were wrong 😢 Yes, it was a smaller amount, but since it is straight peanut flour it has a strong peanut smell.  She smelled it before the nurse even handed her the cup :( The smell alone was enough to make her queasy.  Drinking it upset her stomach.  We had to stay an extra 45 minutes to make sure she was okay because she kept having stomach pains.  She fought through it though and we stayed distracted by playing games :) 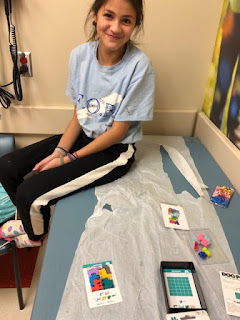 Since we had to stay late, we couldn't eat lunch and still make our train, so we decided to get a later train and eat a slow-paced lunch at the train station (we were hungry!).  We got home an hour later than expected and a little tired from the fretful morning, but it certainly could have been worse!

After doing this dose for 3 nights though, I can see that it's only going to get harder and harder, not easier like we were hoping.  Please keep her in your prayers.  She wants to do this, but forcing herself to drink the "concoction" is not easy.  Every night is a battle.  It's still giving her some stomach pains - which could be the peanuts or it could be anxiety.  Either way, if it's this difficult with just 1/16th of a teaspoon, I can't imagine what 1/2 a teaspoon will be like!

She only has 3 more updoses after this (she will be going back every month now instead of every two weeks).  And then her last "updose" will be a full peanut which she will do in a different part of the hospital closer to the ER.  That last step is called the peanut "challenge".  That is our end goal, and we'll hopefully get there in April!  That would be an awesome Easter present :)

It seems like an eternity away and it sometimes feels like an unattainable goal.  Please pray for resilience, no reactions and for peace - she could use it!

God bless and have a Merry Christmas!!