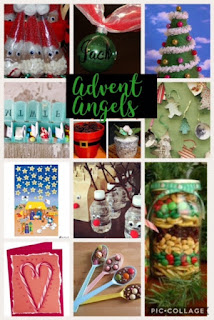 In the first church where I worked they did something called Advent angels. I don't think they came up with it - they probably got the idea from somewhere else, but I loved the idea so I've done it at every church I've worked at! The idea is for the children (all ages), to make four crafts-one for each week in advent. Then, each child is either assigned a shut-in or someone in the church who is sick or going through a hard time (or they may know of someone in need in their own neighborhood). During each week of advent, the children deliver their gifts to their assigned person...BUT, the catch is, you can't let the person know who you are until the last week! :)  I can't tell you how much fun my kids have sneaking around, leaving gifts and running :)  And to see the gratitude on the faces of the recipients during the last week is priceless :)  So, I thought I would share this idea with everyone this year-in plenty of time-so if you wanted to do it, you could!  Here are a few activities we've done in the past and a few we're going to do this year.
In actuality, we try and use stuff around the church.  I am also a bargain shopper so I shop after Christmas and get things for the next year.  We don't have a large budget so creativity is key :)
Also, you have to remember, we make them all at one time - and there are four to make...so they can't take long (and unless you have a lot of helpers, some of them need to be quite easy and self-explanatory).  I like to have one station a Christmas card station where they make a simple but neat card to send on the first Sunday to explain what is going on.  I also assume that many of the people that we're sending our gifts to are stuck in their rooms or houses a lot.  So, for the four gifts, I try and make one an ornament, one a table decoration, one that includes food and then an extra one.

So, here are some ideas to kick off your Advent Angels :)