I wanted to get this up a while ago...like a couple weeks before Thanksgiving...but I guess a few days is better than nothing! I organized activities for my preschool class and our church thanksgiving festival so I thought I'd post some ideas here :)  Hope some are useful for you! 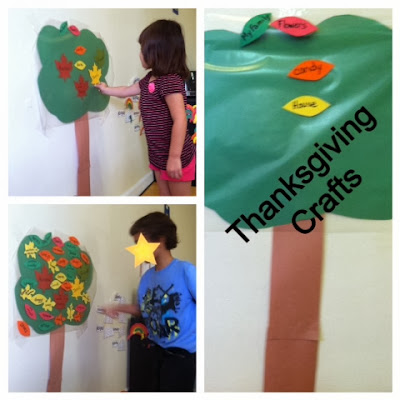 This first activity I started at the beginning of November during our circle time.  We called it our "Thanksgiving tree".  I precut leaves and then asked each child what they were thankful for that day.  I wrote their answer on the leaf then they put it up on the "sticky" tree (I taped contact paper to the wall so the sticky side was out).  I loved hearing their answers every morning and I loved that they always tried to think of something different :)  Afterwards, we would pray together and they would voice what they wrote.  I actually did this with my own little monkeys last year - but we had two trees...one for "Thanks" and one for "giving"...an idea I saw online.  Instead of a formal prayer at dinner we would alternate and put leaves on the trees - either giving thanks, or telling how we "gave" to someone that day.  Very nice experience :) 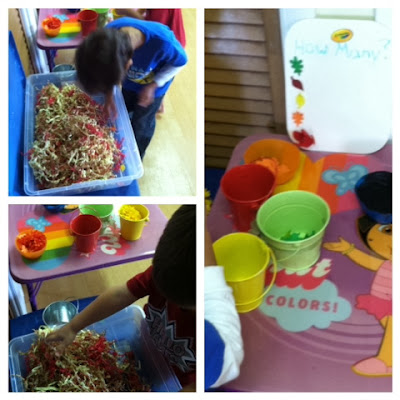 I have a personal problem with putting food in my sensory table.  It goes back to when I was teaching in Peru and I had a friend that went to Mexico on a mission trip.  She did an art activity using beans (maracas I think) and at the end of the activity when they were leaving, she noticed the parents coming in and picking the beans up off the floor and putting them in their pockets to take home.  After hearing that, and after my experiences in Peru, I told myself that I would try extremely hard to never use food for an activity.  When I search for fall sensory bins, that becomes more difficult (all the ideas had rice, beans or noodles!) - but I ended up doing this one.  Simple, but the kids really liked it - and I got to work with the older ones on counting to 20 as well as comparing and contrasting.  The younger ones worked on sorting, colors and counting as well.  Its a bunch of that Dollar Store raffia type stuff (not sure exactly what you call it) littered with foam leaves (also from the Dollar Store :)  You can put as many leaves as you want (you could even use tongs for them to use to fish them out) - I put ALOT because I wanted to work on rote counting.  You can see I had a dry erase board by the station.  During our journal time I took it to the carpet and we counted out each color and (the older ones) wrote down how many of each color.  Then we talked about which had the most, least, etc.  One day, I'm going to get all the sensory bin pictures I have and write a post about them...all non-food! 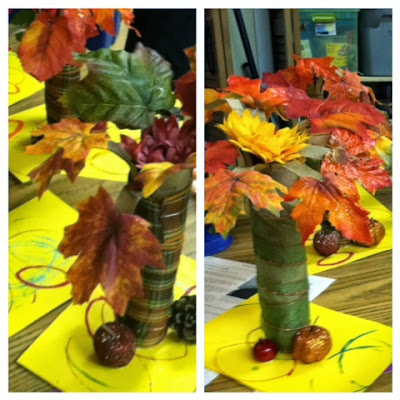 I found this idea somewhere on pinterest and adapted it.  You need a paper towel roll, something to cover it with (I used fall colored ribbon), scissors, leaf cookie cutters, glue, stapler (to staple the ribbon at the top) and pretty fall leaves.  You cut the paper towel about a third of the way down into "branches".  I let my Sunday school kids do this.  You don't really need them all the same size because branches aren't supposed to look the same!  I also had them decorate the yellow paper (green might have been better but I wanted something that would show the paint) with fall color paints and leaf cookie cutters.  Just for the record, I only had one leaf cookie cutter and I had 2 kids wanting to stamp, so I cut a piece off of the paper towel roll and bent it at the top and bottom so it was the shape of a simple leaf :)  it worked!  I also had some little apples and pine cones laying around so I glued them to the bottom.  They turned out quite cute and I got quite a few compliments :)  Next time I would probably staple the leaves as well - gluing took forever. 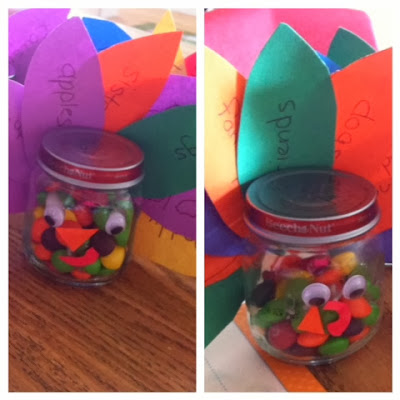 My favorite craft!  You need:  baby food jars, candy, googly eyes, colored construction paper, glue and tape.  I did this with my preschoolers and at our festival.  For my prek group I precut feathers, the beak and the waddle...however, I had each of them cut out ONE leaf so they could practice cutting.  I also wrote on the leaves what they were thankful for, but I made the older ones write on the one leaf they cut out :)  We filled them with skittles but M&Ms would work...or candy corns!  With my large group at the festival, everything was precut and prefilled - made it easier and faster.  A few things I've learned from this - you can't glue the feathers - they fall right off.  Tape them...waaay easier.  Glue dots would be awesome for the eyes, beak and waddle - but I didn't have any.  Just know that if you use glue, the eyes will slide down until they dry a bit :)  Also, I used 8 feathers for the prek but 5 for the festival.  Some kids have a hard time coming up with that many and need some prompts - I don't like putting ideas in their heads so I used general ones like:  Where is your favorite place to go?  What is your favorite food?  "Who" are you thankful for?  What is your favorite toy?  Where does mommy always like to take you to have fun? etc... 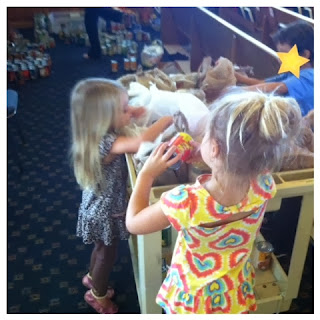 This was a spur of the moment stroke of luck but I took complete advantage of it!  A local school donated canned goods that were to be given out to the homeless for Thanksgiving.  It all arrived right when the kids did and our volunteers started sorting it right away - so we jumped in!  Preschoolers LOVE sorting and I took advantage of the opportunity to talk about helping those in need as well as making it a "following directions" activity.  We had so much fun!! 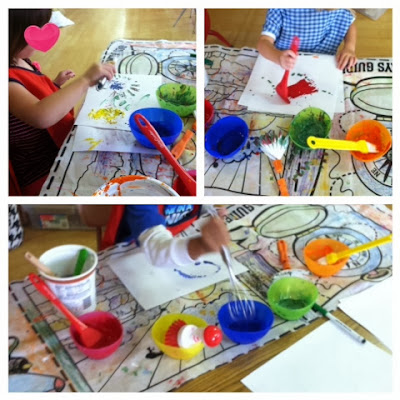 During the month of November we talked about the harvest, what we get from plants and of course you can't have Thanksgiving without the FOOD!  So, we took things out of our play kitchen and my real kitchen to create works of art!  Too much fun :) 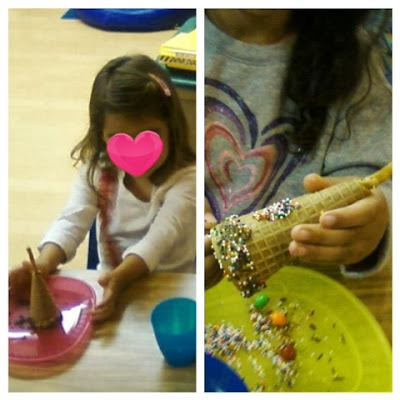 Another creation I found on pinterest...but dumbed it down for me :)  We did this activity last year, but didn't get around to it this year.  The site I found said to bake cupcakes inside - but that was just waaay too much trouble :)  My kids love nutella so I put some nutella around the edges inside and out as well as out the top and then put sprinkles on their plate.  They rolled the cone around in the sprinkles :)  Then they got a few pretzels to decorate the top. Easy peasy! 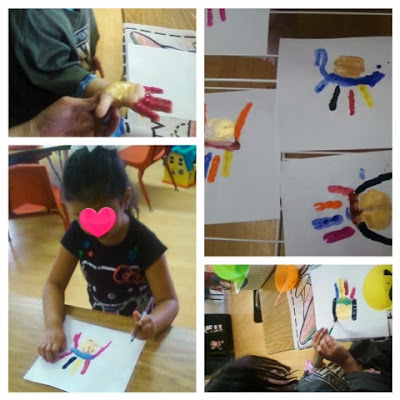 This is something else I did last year that I got from pinterest - perhaps I still get to it this year.  They turned out SO cute!  You paint their palm and fingers - no thumb (I pulled out a few colors for the palm they could choose from - but had many choices available for the feathers/fingers ).  You have to leave a blank spot in between to paint the headband (which you could do on their hand, but I let the kids paint it on the paper).  I also let them draw the face and hair :)


Hope you got some ideas and maybe you have something wonderful that worked for you this Thanksgiving!  Please share!!  I love getting new ideas!!
Posted by Laurie j at 9:24 PM