Camping in the Keys!

We decided to take a break from everything going on and go camping for two nights in Key Largo.  We decided on Pennekamp Park and it was a good choice!  It was beautiful! 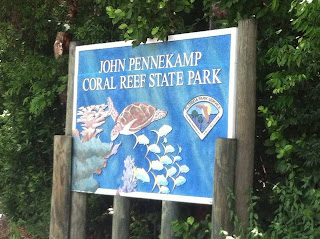 Since we have a 5 and 6 year old I scouted pinterest to find some new ideas that we hadn't done before.  Since this was the first time we had ever camped for 2 nights (usually it's just one), I figured I needed to have a couple of crafts on hand.  Plus, the weather people (who are NEVER wrong here in south florida...that was sarcastic in case you didn't get it) said we should expect the remnants of tropical storm Dorian all day friday.  Turns out I only needed one, but always be prepared :)  Dorian, never made his appearance :)
The crafts I chose all used God's creation in one way or another.  I had black paper for the kids to put things on (rocks, leaves, etc) to see how the sun faded the paper but not under the objects. I had glue so we could put together little houses or objects from nature by gluing twigs and stuff together and I saw a neat idea to have them write their name on a piece of paper using things found in nature and glue it down (then frame it).  Didn't do any of those--at least I've got ideas for next time.  Instead, since my 6 year old son is into frogs, I found a template on pinterest for frogs' legs and you cut them out of foam.  You glue a rock on top and paint it (or use permanent markers which is what we did) and voila!  you have your own homemade frog.  Saying he loved it is an understatement.  I think he ended up making 5 or 6 of them :)  I also found a template for a ladybug and reworked it so my daughter could make one of those.  Turned out cute but one was enough for her.  She'd rather play than craft :) 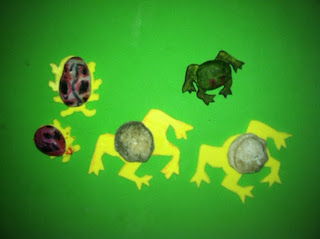 The first night, we tried out two of the recipe ideas I found on pinterest.  If you want to follow me on pinterest or if you want to see what i pinned for camping go here.
The first one we tried was wrapping crescent rolls (we used flattened biscuits from the can) around the hot dog.  It didn't work :(  the outside cooked but the inside was raw.  we still used them cause I layed them out flat on the grill.  they just didn't work around the hot dog.  The other one we tried was the ice cream cone with little marshmallows and chocolate chips in them.  We wrapped them in aluminum foil and laid them on the grill while we ate our dinner.  They were PERFECT!  yummy.  super idea!  Wish i'd gotten a picture.  the only thing I'd change is how many marshmallows we put in. When they melted they were half the size so the cone was half empty.

The camp had three beaches - really two - although they advertise three.  The first one we tried was very nice - a little crowded and it got deep pretty fast. it was beautiful though!

The second day we tried out the second one and LOVED it!  It was shallow for quite a while, then got deep, then got shallow again - where we could use our goggles and snorkle to look for fish - which we saw quite a few of!  It was also not as well known I guess, cause there were fewer people.  There were 4 or 5 palm trees on the beach which provided natural shade.  Basically, it was perfect.  The kids wanted to live there!!  my hubby was brave and took his phone into the water to take this picture :)  we had to go out that morning and buy some pool noodles.  they can both swim, but if we wanted to hang out in the deep part for any amount of time it was easier and safer for them to have the noodles.  plus, it helps keep your body still while you float around and look at the fishies down below :)

This is my better half standing on the rocks in what looks like the middle of the ocean :)  around him it's shallow and my son loved swimming around there with his goggles and checking out the "coral reef" (that's what he called it - although I didn't see any coral...just rocks.  but i couldn't convince him of that!).

We also enjoyed the free aquarium the park has and then went and got ice cream at the gift shop.  It was VERY hot and hanging out at the tent wasn't very relaxing.  so, we got the ice cream then found some shade to enjoy it.  We happened to find a sandbox in the shade as well and the kids played there for quite a while!

Another cool thing was that we were lucky (?) enough to get one of the campsites that was near the water where their 4 iguanas lived.  When we were eating lunch they all sauntered by to visit :)  Two of them were a beautiful green (males I think they said) and the other two were much larger and grey.  We estimated the longer ones from mouth to tip of their tail to be about 4 feet (about the length of a small gator!)!  We were told they wouldn't hurt us unless we went after them...which we didn't :)  They found our food bag, and even though we were right there next to it (literally a foot away) they crept up to it a few times :)  very funny to watch :)

on the last night, we went and watched the sunset at the third beach (which is very small and right next to the second one - but the only one with a view to the west).  We don't get to watch the sunset on the beach in ft laud because we face east - we only get the sunrise :)  It was stunning.  God's work at it's finest :)  The only problem was the mosquitos and gnats that were everywhere.  My repellant helped against the mosquitos but not the annoying gnats that bit.  So, for the next time, we decided we'd watch from the water!  they can't bite us there :)

Overall, we had an awesome time :)  Of course, anytime a pastor takes a vacation there's a risk...something could happen while he's gone - esp a small church where there is only a solo pastor.  While we were gone someone in our church passed away.  My husband visited her right before we left but wasn't able to see her.  He was going to see her when he got back and she unexpectedly passed away.  It's hard not to feel guilt when we go on vacation cause we know he has a 24 hour job.  At the same time, how can we not go on vacation once and a while?  Just the hazard of the job I guess...

Thanks for reading and God bless!
laurie